World Youth Day is much more than ‘Catholic Woodstock’ 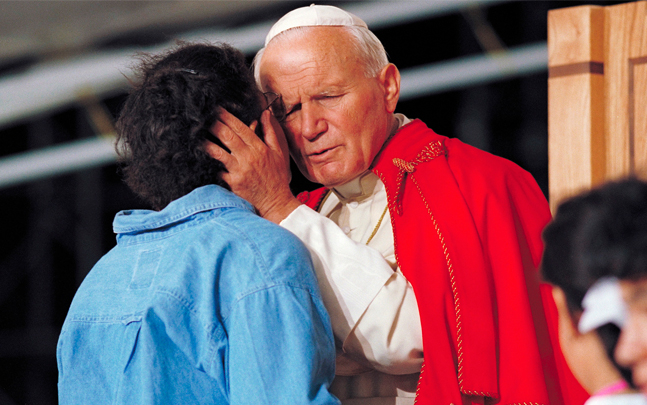 World Youth Day, a massive youth festival staged somewhere in the world every two or three years, has been styled as the «Catholic Woodstock,» but that fails to do justice to its impact — on vocations, on youth ministry, and in changed lives.

Over the years some critics have tried to dismiss this gathering as merely a Catholic Woodstock- or, in modern terms, a South by Southwest or Coachella equivalent. While the comparison is apt in terms of size and enthusiasm, it fails to recognize World Youth Day’s substantive contributions to both Church and civil life these past three decades.

For starters, World Youth Day has been one of the primary motivations for vocations to religious life in recent years. It’s no coincidence that in the very years in which many of the Church’s seminaries were in decline and vocations around the globe were plummeting, World Youth Day was founded.

World Youth Day-by providing an occasion for Catholic identity to be presented in a new and creative way-effectively created a breeding ground for a renewal in religious life.

The latest data from the Center for Applied Research in the Apostolate (CARA) at Georgetown University found that one in seven of last year’s class of 2015 priests participated in a World Youth Day-more than any other Catholic gathering or festival.

Similarly, in working on my 2013 co-authored book Renewal: How a New Generation of Faithful Priests and Bishops is Revitalizing the Catholic Church, I interviewed vocation directors from across the country who consistently emphasized how they couldn’t overestimate the significance of World Youth Day.

Father Francis Bitterman, vocations director of the Archdiocese of Chicago, who will be making his first pilgrimage to World Youth Day in Krakow this summer, recently told me: “The reason I decided to go is that I have heard from many priests and seminarians over the years that WYD had an enormous impact on their vocation.”

“For many of them, experiencing the universality of the Church and witnessing the enthusiasm of so many young people, confirmed for them their own sense of vocation and place within the Church,” Bitterman said.

While World Youth Day may only be a week-long event every two to three years in one particular location, it’s also effective in creating new programming on a local level.

Archbishop Anthony Fisher of Sydney, Australia-who during his time as an auxiliary bishop was tasked with planning the 2008 World Youth Day in Sydney-recently told me, “Before the lead up to World Youth Day there might have been thirty or forty youth groups in the city. Today there would be at least two hundred flourishing youth groups and ministries in this city and World Youth Day is entirely the cause of that-at least after the Holy Spirit!”

In his closing address of his first World Youth Day, Pope Francis told the young people gathered in Rio, Brazil in 2013 that he wanted them to go out and “make a mess.” It wasn’t a directive to make a literal mess – it was a call to shake things up or, to use another phrase he’s keen on, a call to conversion.

World Youth Day is a time in which young people from around the world enter as one type of person, and they leave changed.

For some it may be a call to enter religious life but for others it’s a time to return home to start a new ministry at their parish, to visit those in prison, and to serve those in need. What it certainly is for everyone is an opportunity to reject the “globalization of indifference” that Francis continues to preach as a central message to his papacy.

World Youth Day provides an occasion to pass along this zeal, and a chance for folks to take it home with them.

Both are messages that encourage young people to change the world-but a reminder that it begins with personal conversion. For the two million young people that will gather in Krakow in just a few weeks, this World Youth Day may very well serve as that starting point.