Vatican’s old guard may have notched a Pyrrhic victory 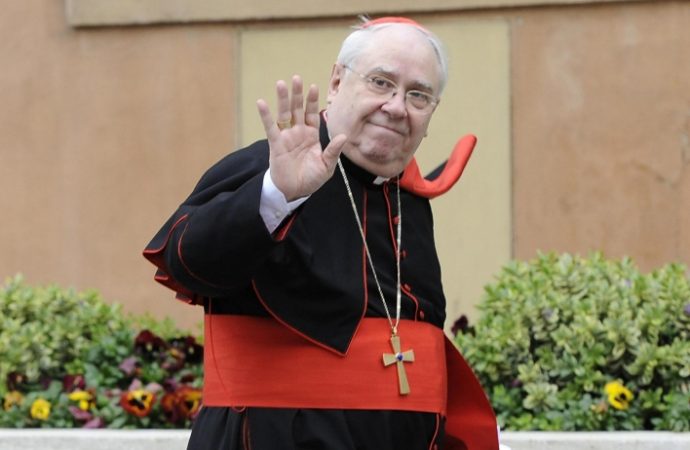 Cardinal Domenico Calcagno, President of the Administration of the Patrimony of the Apostolic See. (Credit: CNS.)

On Saturday, Pope Francis issued an edict restoring several financial powers to the Administration of the Patrimony of the Apostolic See (APSA), taking them away from Australian Cardinal George Pell and his Secretariat for the Economy. With power, however, also comes the blame if something goes wrong.

Any ways of analyzing the fault lines in the Vatican, but perhaps the most time-honored (if also often exaggerated) is the tension between an Italian old guard and pretty much everybody else. By conventional political logic, anyway, Saturday saw the Italians notch a fairly big win.

It could turn out, however, to be a Pyrrhic victory – because by taking back control over a range of financial powers, the old guard has also reclaimed the blame the next time something goes wrong.

On Saturday, Pope Francis issued a motu proprio, meaning a legal edict, delineating the division of responsibility between the Vatican’s Administration of the Patrimony of the Apostolic See (APSA) and the Secretariat of the Economy (SPE). The former is headed by Italian Cardinal Domenico Calcagno, the latter by Australian Cardinal George Pell.

In effect, the motu proprio restores several important functions to APSA that had been given to Pell’s department in 2014. One local news agency bottom-lined the result this way in its headline: “The Italians win!”

To understand what’s going on, we need to take a step back.

Although public fascination with Vatican finances usually focuses on the Institute for the Works of Religion, the so-called “Vatican bank,” in truth most of the bank’s $6.5 billion in assets is not Vatican money – it belongs to depositors, with almost half resting in the accounts of religious orders from around the world.

The real financial heavyweight in the Vatican has long been APSA, controlling both real estate as well as investments, and also running a wide range of other functions such as purchasing and payroll. The total value of the real estate holdings alone under APSA’s control is officially estimated at around $1 billion, though many observers suspect that because of a lack of up-to-date market valuations, the actual figure may be several times higher.

As part of the first round of financial reform in 2014, many of APSA’s functions were stripped away and handed over to SPE under Pell, including real estate, purchasing and contracts, support services, and so on. The vision was that APSA would be transformed from a financial administrator into the Vatican’s “Central Bank.”

That move was suggested by a papal study commission on finances, and was seen in part as a reaction to scandals that had plagued APSA, including a cause célèbre involving a former APSA accountant known as “Monsignor 500 Euro” who was arrested by Italian authorities in a cash-smuggling scheme.

From the beginning, however, there was resistance. Many in the Vatican saw Pell’s takeover of APSA’s functions as a power grab, and there was a natural temptation to style what was happening as pushy Anglo-Saxons trying to dislodge the Italians.

Politics aside, there was also a question of substance about the right way to promote a division of powers.

From the point of view of Pell’s critics, you can’t have SPE responsible both for oversight of financial management and direct administration – it’s a clear case of “who will guard the guardians?”

Those favorably inclined to the pope’s decision on Saturday describe it as an option in favor of building interlocking systems of administration and control, which aren’t dependent upon any one personality to function properly.

Pell’s supporters, on the other hand, argued that allowing APSA to be in charge of purchasing for itself as well as others is also a conflict of interest, which is why responsibility should be lodged somewhere else.

As that internal debate unfolded, management of Vatican real estate was returned to APSA in early 2015, but most other functions remained with SPE.

Last fall Francis set up a working group led by Italian Cardinal Velasio De Paolis, former head of the Prefecture for Economic Affairs, to study the situation further, and Saturday’s motu proprio is the result of its work.

The motu proprio stipulates that effectively immediately, most of the remaining responsibilities previously held by SPE for direct financial administration, including asset management and purchasing, are going back to APSA. The only significant area of administration in which SPE will now have a direct role is human resources.

The underlying principle is what the motu proprio calls a “clear and unequivocal distinction between control and vigilance.”

The net result is a back to the future scenario – after all the upheaval of the last three years, the APSA of 2016 won’t look terribly different from the APSA of early 2013.

However, the motu proprio also specifies that Pell’s department will still be responsible for “oversight and vigilance,” including approving APSA’s budget and balance sheets. In other words, APSA may have many of its traditional powers back, but SPE has the authority to oversee how those powers can be deployed.

The next battle to determine how much SPE’s influence still counts may come over draft procedures Pell’s office has issued for matters such as disbursements of petty cash, tracking expenditures, and payments, which are designed to apply to all Vatican departments. The procedures have been criticized by some other players, especially Libero Milone, who was appointed as the Vatican’s first Auditor General in June 2015.

Italian Cardinal Pietro Parolin, the Vatican’s Secretary of State, has suggested bringing together the various officials responsible for financial oversight and administration to reach consensus.

In the meantime, Saturday’s motu proprio will be seen as a setback for Pell.

Veteran Italian commentator Andrea Tornielli, for instance, wrote on Saturday that SPE is now no longer a “super-ministry,” and the new system will force Pell and his team to become more “collegial.”  The Associated Press reported that Francis had “clipped Pell’s wings.”

Under the heading of the law of unintended consequences, however, there’s an ironic dimension to this “reform of the reform” worth noting.

Prior to Saturday, if a new financial scandal had erupted at the Vatican, there would have been no debate over who’s responsible – Pell had the power, and with the power comes the blame when things break down.

Now, however, the political calculus is different.

If some new mess takes shape at APSA, it would no longer be Pell’s fault, at least in any direct sense. It would be on Calcagno and his team – and, more broadly, on the forces that pushed to put them back in charge.

And, let’s face it – the possibility of a fresh scandal blowing up is not exactly the world’s longest shot. The Vatican has been a magnet for such meltdowns over the years, and while new controls are now in place, you don’t just upend a culture overnight.

In other words, for the Vatican’s old guard, the motu proprio right now probably appears a satisfying result. Depending on how things break, however, it could be a classic case of the old wisdom, “Be careful what you wish for, because you just might get it.”