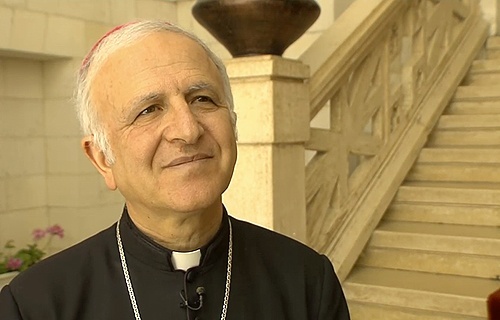 Vatican City, Jul 2, 2014 / 02:46 am (CNA/EWTN News).- In wake of escalating tensions between Israel and Palestine following the murder of three Israeli teens, Bishop William Shomali has encouraged leaders to work for reconciliation rather than retaliation.

“We are against the killing of these three young Israeli men. It’s a homicide, it’s a crime against humanity,” the bishop said in comments made to CNA July 2.

“But at the same time we should also look at the whole situation between Palestinians and Israelis (in order) to reach a reconciliation, so that such crimes are not repeated.”

Bishop Shomali, who serves as the auxiliary bishop of Jerusalem, spoke in wake of the recent killing of three Israeli teenagers – Gilad Shaer and Naftali Fraenkel, both 16 – and Eyal Yifrah, 19, who disappeared June 12 while hitchhiking near the West Bank city of Hebron.

On Monday, Israeli security sources confirmed that the bodies of the three young men were found in shallow graves, covered by few rocks, not far from where they were last seen.

Israeli Prime Minister Benjamin Netanyahu has faulted the Palestinian organization Hamas for their disappearance, stating at the start of an emergency session of his security cabinet after the bodies were found that “Hamas is responsible. Hamas will pay, and Hamas will continue to pay.”

The teenagers, he continued, “were kidnapped and murdered in cold blood by human animals” and stated that “Satan has not yet invented vengeance for the blood of a small child.”

Although Hamas has joined the coalition that rules the Palestinian territories, it is considered to be a terrorist group by the U.S. government. In their reply to Netinyahu’s comments, Hamas leaders stated that Israel would open “the gates of hell” on themselves should they attack.

In the midst of the rising tensions, Bishop Shomali emphasized that a true act of retribution is not done “in retaliation,” but rather works toward “healing the wounds present between the two peoples.”

“This is what we need. Because all the time there are victims from both sides. And if we don’t keep them from this we continue in a vicious circle.”

In wake of Israel’s launch of 34 airstrikes over the Gaza Strip Tuesday, which officials stated was a response to 18 rockets that had previously been fired into Israel from Gaza, the bishop encouraged both Israeli and Palestinian leaders to continue working for peace.

The bishop also noted that the conflicts are rising less than one month after both presidents met with Pope Francis and Patriarch Bartolomeo I of Constantinople at the Vatican for an invocation for peace. He observed that “the prayer doesn’t give an effect the same day or the following day.”

“The Lord is not like the mouse of a computer where you click a button,” he said. “We have to be very patient, and wait and wait, like the olive tree that was planted by the three leaders. It will take five years before producing fruits.”

“The same with the prayer that has been done,” he noted, affirming the prayer was “a success” despite the fact immediate results will not be visible.

“We need time. I am sure that (the prayer) is useful to prevent either a deterioration of the situation, it could be worse than that, or to have a final solution, but not on the following day. We have to be patient.”