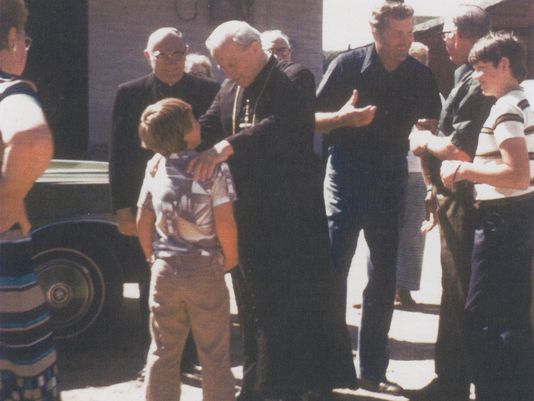 STEVENS POINT – Philip Kosloski is excited to see the fruits of his labor over the past year, chronicling the visit of a future pope to central Wisconsin, finally reach the public.

Since December 2013, Kosloski has been researching the visit of Cardinal Karol Wojtyla to the area in 1976, just two years before he was elected to the papacy, the head of the Catholic Church, in October 1978.

That’s when he took the name most people know him by — Pope John Paul II. He would go on to become the second-longest serving pope before his death in April 2005, and would be canonized as a Catholic saint in April 2014.

Kosloski spent months interviewing people or family members of those who took park in the visit, then connected with WestBow Press, a Christian book publisher that helps authors self-publish books. Kosloski said that his book, «In the Footsteps of a Saint: John Paul II’s Visit to Wisconsin,» will be available for purchase on his website, www.philipkosloski.com, at the end of this week.

«I’m more excited than anything because so many people have been supportive of this project,» said Kosloski, 28, of Wisconsin Rapids, who is also a Junction City native and a Stevens Point Area Senior High graduate.

Leon Ostrowski spoke to Kosloski regarding the experiences of his family as part of the visit. Ostrowski’s step-father, Leonard Groshek, helped coordinate Wojtyla’s schedule while he was in the region, which included a stop at the Stockton farm of his mother’s brother-in-law, Maurice Groshek.

Ostrowski, who provided Kosloski with documents on the plans that were made for Wojtyla’s trip, said he was happy to be part of process and to see the history of the event chronicled.

«When I found out what he was planning, I wanted to give him as much encouragement as I could. There were so many people who worked on that trip from the sidelines, and I want to see them get the attention they deserve,» said Ostrowski, 73, of Plover.

Kosloski, who serves as the director of adult formation and sacred liturgy at Saints Peter and Paul Catholic Church in Wisconsin Rapids, said his interest in Wojtyla’s trip began when he learned about it while studying to become a priest at the University of Saint Thomas in Minnesota. Kosloski said learning more about the trip through his research for the book has given him an added appreciation for the late pope as well as the local residents who welcomed him.

«It’s been kind of like a treasure hunt. I would speak to one person, then they would suggest another person or somewhere else I should look,» Kosloski said. «It was wonderful to hear how much people cared about meeting Cardinal Wojtyla, and how much he cared about everyone when he met them.»